Madame Monsieur won Destination Eurovision, the French selection for Lisbon with their self penned song Mercy.
Madame Monsieur are Émilie Satt and Jean-Karl Lucas. They released their album, Tandem in 2016, which is well worth checking out.
Their new album Vue D'ici, released on April 20, includes the Eurovision entry in its full original version.
The album is out on CD and through digital stores. A promo issue in a larger (6 inch) pop-up card sleeve is also issued.

Mercy was released as a digital single (Play Two).
In the week before the French final Mercy already entered the French charts at #8.

A 1-track promo with the full version has been made.
The Eurovision edit was revealed on March 13.

A 3rd promo has the same  6 tracks but a slightly different sleeve. This is the one used in Lisbon 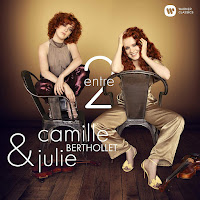 Classical version
Madame Monsieur join sisters Camille and Julie Berthollet on their version of Mercy.
The classical musicians (violin and cello) released their version on the CD Entre 2 in November 2018 and a reissued deluxe edition in 2019. (Warner Classical )
It's pretty beautiful. You can watch a video of a live performance here at Dailymotion.

France selected their 2018 entry through a three night preselection.
The final was on January 27. All 18 songs competing have been released (digital)
Find out more here at the Destination Eurovision pages.

Thanks for commenting, please don't be anonymous

Top 10 most read posts this week